Life just got a li'l harder

January 20, 2007
After dusting off the cobwebs off this blog, I write today. (Why do I feel like using the word: sabbatical?)

I just feel that life keeps getting harder for people as they grow older. Especially because of the learning factor.

Now, I start with my theory:

People usually learn a lot of stuff when they are young. It's like their brains are formatted and you've got all of your hard disk to use. It's like you can keep putting data in forever. The catch is, you can't archive your old data into tapes nor remove them. And you've got to put up with bad inode information as well. And plain old stupid data. :|

Example: I still remember something about Oxygen and symmetric sigma orbitals outside of pi orbitals in a valency diagram.

But as you keep stuffing things into it down the years, it eventually becomes full. So you try harder and harder to squeeze in more data, as your environment changes; People expect you to upgrade yours OS files once in a while. Or at least get the old programs to work with newly acquainted data. Unfortunately, the problem is SPACE. So, you try to relate the new data to the older ones, and basically compress the data (much like the LZW algorithm used in Zip files of today!) The major difference is you try to compress it as much as you can. You don't usually relate it to the last 3 years of information only. It could even be something you learned 10 years ago. So, you perform extremely greedy compression.

And, as more data keeps pouring in, more space is filled, more the need for compressing the data better, more the data to be searched, and eventually more effort in storing it. If it's something you have learned, it won't be stored (because it already was stored)

So, it's harder to learn new things as things keep piling up in your unerasable hard disk.

I think that this degradation in one's ability to learn at a particular rate is inverse exponential with respect to time. Here is a simple mathematical curve I plotted to show the relation: 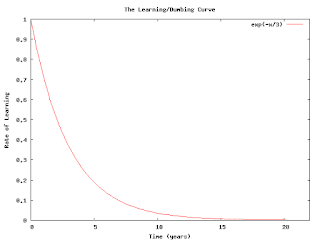 I feel that I'm on one of those years where I haven't got much space in my hard disk. I might probably find a treasure trove if i go back through time. Who knows! ;)

As the saying goes you keep learning as and when you grow.The anology you have presented is great.
Let me tell you onething dear its all perseverance that matters.

Anyways you are a prodigy vis-a-vis me.:)

Have consistency in everything you do.
cheers
10:28 PM

As the saying goes you keep learning as and when you grow.The anology you have presented is great.
Let me tell you onething dear its all perseverance that matters.

Anyways you are a prodigy vis-a-vis me.:)

Have consistency in everything you do.
cheers
1:41 AM

Nikhil said…
so you think you can get away by giving such a simple analogy? how about cubic piecewise continuous polynomials? just kidding. nice work! you can count on a new daily visitor.
9:14 PM

Staring into the Abyss

April 09, 2018
Automation is the new buzzword. People are losing jobs like crazy. The hunger games have started  and now everyone is being forced to feed the croniest capitalists in the world. The beautiful gig economy has lost its sheen and has turned into nothing but a mere bargaining game in every market.

So where does that leave us? Into the abyss of irrelevance.

For every economy that needs a person to make and sell, we have a machine. But who is going to buy it? Another machine?

Is Communism is going to show it's head again? It will be interesting to watch.
Post a Comment
Read more

October 22, 2016
There has been a lot more thought now on why our universe is nothing more than a sophisticated video game.

I have often thought about it as such, and I have likened light to be the medium of energy and information transfer in our Universe. I would think gravity and forces were caused by light information travelling to particles, causing them to move accordingly.


Now, according to me, it is hard to go back in time and jump into the future, expecting the Universe to compute all of these events quickly enough. Why, you may ask? Because it indeed takes a long time to compute your own life, one dependency at a time and one living entity at a time. Otherwise, Life would only be throwing coarsely accurate but completely random events at us than the true, perfectly accurate simulated future.


Now, time is pretty relative to who computes it. There are some frames in life, where when nobody's observing anything, the Universe could go on a rampage and advance our timelines rapidly. On t…
Post a Comment
Read more