May 08, 2005
Sandeep and I decided to go out this Saturday... First, we went to the Mahalakshmi mandir, and took a darshan of the beautiful, ever merciful goddess of wealth.

From there, me went via Churchgate, to the Gateway of India. From there, we hitched a ferry on to the Elephanta island. It was the farthest I had gone on sea.. and the cruise was magnificent!

The island got its name from an elephant statue which welcomed the first Britishers on these islands. Before that, It used to be called Gharapuri, or the island of caves.

It's a bane that tourists get milked and exploited so much, in India. First you have to pay to get in, and pay to see the caves, and pay more to drink water, eat food and what not ... Well, after paying enough, and a small uphill trek, we could get a glimpses of those caves. It appeared to us, as a half-constructed Shiva temple, with lots of nice statues and lingas. Most of the statues were destroyed, thanks to the ignorant firangees before us, who supposedly broke these down for fun and amusement... what a shame! 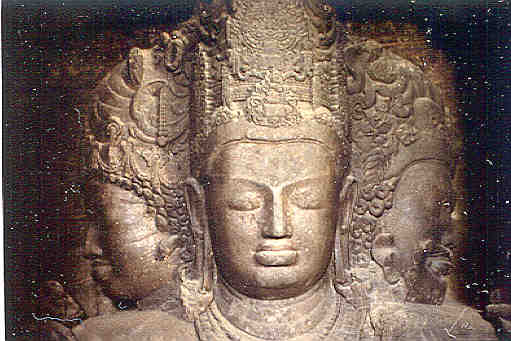 Then, we went on the back side of the hill, climbed up to see the mighty bandhuks on the Cannon hill. The view was breath-taking from the top! It kinda' reminded me of playing Age of Kings. Well, we were quite tired after that. We climbed down and waved goodbye to the enchanted island and it's marvellous relics...

Vetty Max said…
Paying to see the monuments is fine with me, but its water costing much more than it does elsewhere, which is the problem and there needs to be some change. In most cases its a monopoly and you have to pay out because there is no competitor nearby.
12:16 AM

My typical day begins at 10 AM. I wake up, and mom makes the bestestestest filter coffee! Then bath, then eat (mmm.. BURP!). Then TV+siesta! Then go out. Then come back, eat dinner (uff.. mommah, i'm becomin' a baloon!) TV+Sleep. What a busy schedule!

When it comes to food, I never complain at home. My mom's been an ACE COOK, and have never stopped relishing her food. I am eternally thankful to the almighty for the same.

Mention TV and think CAS. CAS is the root of all evil. FTA channels are ohhkayy, but I'm missing out on all those nice movies and soaps thanks to CAS. Have started tuning to VH1... It's cool, plays some wonderful music. and no CRAP! So, there was this show called The Fabulous Life of the Hilton Sisters .. I was all like: "Wow! These two are this spoilt that they decided to make a whole series out of it!" but then, some time later, after watchin J-Lo's fabulous life, I decided that the Hilton sisters wer…
5 comments
Read more

This Saturday, myself and Sandeep went to Adlabs IMAX, the only IMAX Dome theater in India. There are only three IMAX theatres in India, the other two being in Hyderabad and Ahmedabad respectively (both are flat IMAX 3D theatres). There, in the gaming arcade, we zipped on a nice bouncy ride in Thrillarium, in a short film called "Mazy Mine". Then we got to play a real game of Pong, and we tied at 6 each. Then after a quick bite, we went to see Robots.


First, we were overwhelmed by the IMAX (Think big) experience. IMAX supposedly features a projection system that's very powerful that it can use the moon as a screen, and a sound system that delivers a whopping 12KW of power output; Cool! We were greated by an intro IMAX movie of A. R. Rahman'sMaa, Tujhe Salaam ... it filled us with an immense sense of national pride to see our tricolor on the magnificent dome screen.